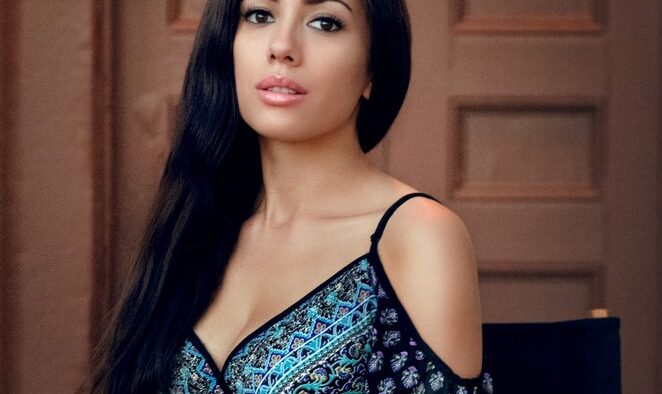 Model/actress Theadina Seyfried is only a few minutes late to our appointment at Chimney Coffee House, but she apologizes profusely as she sits down at our table. “I had a meeting with a nonprofit about their programs and about becoming a donor,” she says, smiling as she sits down. “I am really excited about this because the nonprofit focuses on children’s issues. After this, I will be working on my trip to South Korea to do some research for my new skincare line, so I’ve got a busy day ahead of me.”

It’s clear that Theadina has got a lot of irons in the fire, and she prefers it that way. “My father and mother were the same way,” she says. “I inherited my ‘conquer the world’ mentality from him in particular. It could be no other way since he was a US Army colonel, a journalist, a movie producer, and an archaeologist. Mom was a hard worker, too, since she was a Filipina nurse. No one in my family knew how to do anything halfway.”

Theadina’s father’s work in Hollywood provided her with a privileged lifestyle, she admits. “My father was an excellent provider for my mother and me,” she says. “However, I took for granted what he gave me, and it wasn’t until he passed away last year that I was able to see how wrong I had been.”

The death of Theadina’s father caused her to go through an intense period of introspection. “Nothing prepared me for that,” she says, reflective. “One day he was there, and the next he was gone. I remember sitting alone at home, missing him, and I started looking around at everything I had, everything I had put so much importance on. I realized that I wasn’t happy. Yes, I could buy whatever I wanted, but the next day, those things wouldn’t give me any happiness. I wondered where I could find it, and with further thought, I knew I could have it through a life of service.”

One way she wants to serve people is through her acting. “Movies are sometimes painted as being superficial, but I disagree. Look how relaxed someone feels when they watch one. If I can bring enjoyment to someone who has had a stressful day, that will make me happy. Although, to be honest, I don’t know how relaxed they will be when they see my new movie, a horror short!”

Theadina’s interests are diverse and include entrepreneurship. “2022 is going to be a big year for me. I am so excited about starting my new business, a skincare line,” she states. “I chose skin care because I believe it’s so important and because I want it to be more affordable for women. I plan to make something cheaper but that is still of good quality. I am going to go to South Korea to do some research and then to Africa because that is where I can get Shea butter in large amounts for the cheapest price. I at least want to have a cleanser, SPF, moisturizer, and night creams. That is what I foresee doing with my company.”

Theadina has plans for other parts of her life as well. “I love Europe, so I see myself living in Paris. Maybe I will make that my home and travel the world from there. I see a few more films under my belt as well as me getting into French and European cinema, perhaps even a movie, short film, or independent film at the Cannes Film Festival. I will already have my skincare line, of course. I’d like to either build an orphanage or start my own nonprofit organization for young kids or girls. That is my dream. I just want to help people but also make the world a more beautiful and better place. So, the sky’s the limit. Philanthropy mixed with acting, beauty, and business.”

Theadina has learned some important life lessons through the Hollywood auditions she has been on. “That is a pressure-filled situation, definitely. Having confidence will help. It is vital that you know yourself, who you are, and the reason why you’re doing something.”

As Theadina prepares to leave, she pauses to answer the unasked question. “I was very glad when I discovered my ‘why,’” she states. “My life did a 180 when I was able to understand my purpose. I am thankful that when I look into my future, I see a life of meaning and service to other people. I do think my parents would be proud of me.”